Reflecting on the White Fragility in America Tour

Over 500 people filled the Race Street Meetinghouse on April 17 for the only Philadelphia-area stop of the White Fragility in America Tour. Those who were unable to see the event live were able to watch a live stream in the Blauvelt Theatre at Friends Select School. Toni Graves Williamson, Friends Select’s director of equity and inclusion, arranged the event and introduced the evening’s speakers: Robin DiAngelo, the author of White Fragility: Why It’s So Hard for White People to Talk about Racism, and Jack Hill, a diversity consultant, educator, and author.

Robin and Jack discussed the causes of racial stress, and debunked myths about racism and racial constructs within our society. They also talked about the systems that dictate our understanding of racism, from schools to the Hollywood film industry to the government. Though their dialogue frequently focused on sensitive issues, as both Robin and Jack pointed out, that was primarily the goal. As Robin said, “We’re not going to get where we need to go from a place of white comfort.”

At times, Robin and Jack’s approach to engaging the audience brought a sense of humor to cut the tension in discussing such complicated content. As Toni noted, “One of the best parts of the evening was hearing the conversations that were sparked amongst audience members of all races at the end of Robin and Jack's presentation. People stayed engaged, chatting and responding for an additional 45 minutes or so.” 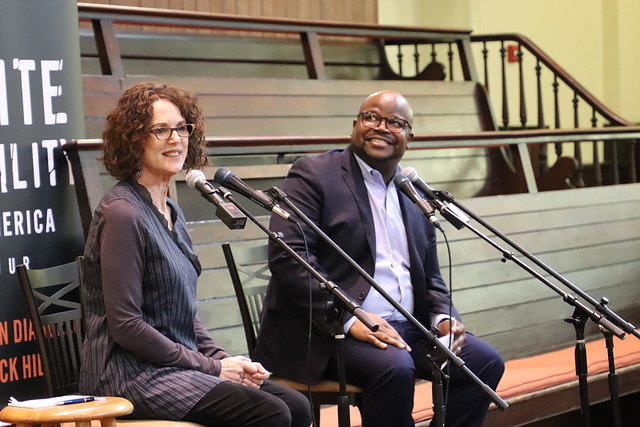 Events like the White Fragility in America Tour and the accompanying book discussion held recently for parents at Friends Select are critical for helping normalize conversations about racial issues. Such dialogues “help make whiteness visible,” as Robin said. To that end, Robin noted that the term “white fragility” was recently added to the dictionary. As Toni said, “This is just a start to ongoing discussions in our community—both in the building everyday and our extended community that we interacted with at the Race Street Meetinghouse.”

Robin and Jack encouraged audience members to think about how they contribute to creating hostile environments for people of color. They ended on the subject of repair. “When we commit an act of racism,” Robin asked, “how do we repair?” It is a process, they both said, that takes courage and strategic intentional action.