Margaret Smith, Director of City Curriculum
Share to FacebookShare to TwitterShare to Google+Share to LinkedInShare to PinterestShare to EmailPrint this page
Full Winter Newsletter

The unveiling event included a musical performance by Friends Select students, a light reception, and remarks by Sheila Hess, Philadelphia city representative, Michael Gary, head of school, and Mia Cohen ’21, as well as our project partners. 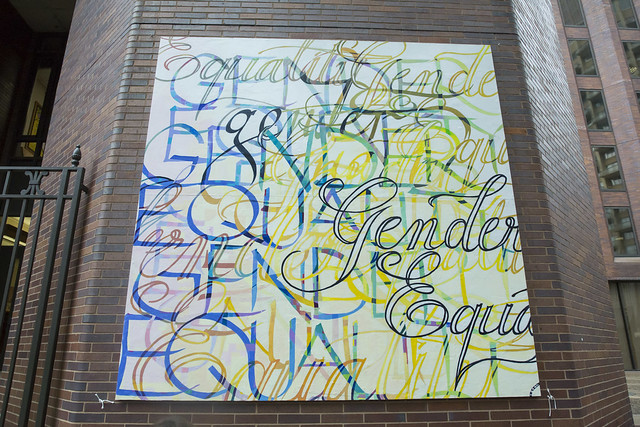 About the Sustainable Development Goals Campaign

193 countries, including the United States, have adopted the United Nations' 17 Sustainable Development Goals (SDGs), which address continuing global issues such as ending poverty, protecting the planet, and ensuring a greater quality of life throughout the world. As the only World Heritage City in the United States, Philadelphia is well poised to raise awareness of these goals. To that end, Global Philadelphia Association has launched its Sustainable Development Goals campaign in partnership with Mural Arts Philadelphia. There will be 17 works of public art created to honor and celebrate the 17 SDGs, which will be displayed throughout Philadelphia. The first of those works of art focuses on SDG #5: Gender Equality, and is on display on the 17th Street wall of Friends Select for the next two years.

The Gender Equality artwork was created by artist Barbara Smolen. It was sponsored by Glenmede Trust, in partnership with Mural Arts Philadelphia, New Century Trust, Widener University, Friends Select School, and Global Philadelphia Association. As part of their sponsorship for the artwork, Glenmede Trust presented a grant to New Century Trust to support their work building economic and political gender equality throughout the Southeastern Pennsylvania region. This intersection of art and activism is important, because, as Mia Cohen '21 said in her unveiling speech, “Here we are today, at this wonderful event where there will be an unveiling of an incredibly significant mural representing gender equality, not because we fully achieved it, but because we are committed to work until we have.”

Equality is one of the six Quaker testimonies (or SPICES). Across all three divisions at Friends Select, students and faculty work to understand what gender equality looks like, and how we can contribute to making it a reality.

Lower school faculty recently formed a Gender Education committee and a partnership with the organization Gender Spectrum to engage in professional development to support faculty as they create a curriculum that will help children build a deeper, more nuanced understanding of gender and gender inclusivity, as well as how they can support each other in feeling comfortable as their true selves in school. In middle school, students can opt to join the Gay, Lesbian, or Whatever club (GLOW) or the Equity, Inclusion, and Allyship committee, two groups for exploring aspects of gender equality and how to promote gender equality in our communities. In upper school, multiple aspects of gender are studied in courses such as the History of Gender or topic-focused workshops. During last year’s Day of Inclusivity, Intersectionality, Community, and Equity (DIICE) students designed and hosted workshops such as Breaking the Gender Binary, Sexism in the Classroom, and Race, Gender, & Pop Culture.

In addition, Friends Select’s LGBTQ+ Family and Friends Group hosted a panel discussion in the Blauvelt Theatre this past spring titled “Breaking the Binary of Sexuality and Gender Norms.” The discussion was open to the public and was moderated by Evan Thornburg, Deputy Director of the Mayor’s Office of LGBT Affairs.

Friends Select’s mission statement begins with “We believe in the Quaker values of respect for all,” and we are proud to be a part of this partnership that uses public art to promote equality regardless of gender.

Continuing the Discussion about SDGs

Friends Select is hosting the Gender Equality artwork, but the Quaker SPICES support all of the U.N. Sustainable Development Goals. This was immediately apparent to Sophia Becker ’20, who was recently invited to join a podcast panel hosted by Global Philadelphia Association to discuss how Philadelphia businesses, cultural institutions, and students are working to achieve the U.N. SDGs by 2030.

Alongside John Smith III of Global Philadelphia, Kyra Kaczinski of Deloitte, and Matt Lobach of Hersha Hospitality Trust, Sophia spoke about the work that she and her peers have been doing toward SDG #4 Quality Education and SDG #13 Climate Action. Sophia was clear that in addition to taking direct action to work toward the SDGs, students are increasingly aware of the actions and motivations of businesses catering to millenials.

“When I and my peers hear that a company is exploiting workers or there is some other major social justice issue, we are less inclined to shop there," Sophia said. "When we are aware that a company is taking steps towards being more environmentally sustainable and treating its workers fairly, we feel better shopping there, and would prefer to promote those businesses.”

Sophia, however, cautioned against generalized statements, and suggested sustainable options need to be available at every price point. “One thing I have noticed is that it is difficult, even in Center City, to find many affordable companies (or any at all) that are both sustainable and equitable," she said. "So I wouldn't necessarily claim that the youth only put their money towards companies that work towards both of these things.”

What Sophia did learn from her fellow panelists is that “there are more corporations that care about the Sustainable Development Goals than I thought, and I met a lot of people who were taking and promoting these initiatives.”

Students in every division at Friends Select work on their presentation skills, and Sophia enjoyed honing her skills alongside the professionals participating in and recording the podcast. “I had to practice articulating my thoughts, somewhat on the spot,” she said. “As the person who was supposed to represent ‘the youth,’ I also had to work to make sure I wasn't over generalizing or claiming things for an entire generation while also voicing common opinion. … I also witnessed how to work through the logistical problems that often arise when coordinating this sort of thing, and how people of different levels interact to make it all come together.”